Michael Haneke’s “The White Ribbon” is one of those films that I fell in love with from the opening shot, much like his earlier film “Cache”. The strength of this film comes from its visual compositions—you could watch it silently and still work out what the film is trying to say. 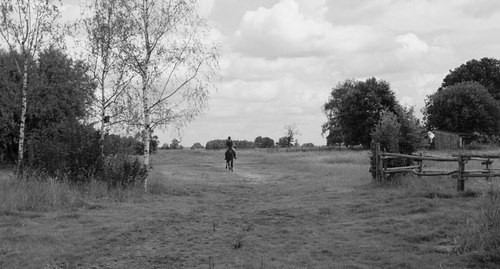 Set in rural Germany before World War I, we are introduced to the townspeople through a series of accidents. The Doctor gets caught up in tripwire on his horse. A child is hung upside down and tortured. A barn is burned. Then another child is almost blinded. Haneke presents most of these incidents beneath narration, either as an attempt to soften their impact or because they are not what the film is about.

The events of the film are told to us by narration, many years after they have taken place. Narrated by the schoolteacher, we see what he sees and know what he knows. Haneke uses traditional detective-story devices to make us think about who did it but this is, as Jim Emerson explains, Haneke’s MacGuffin.

His biggest statement seems to be on the influence of generations of authoritarian and patriarchal rule. In the following shot we see the schoolteacher come to the house of the midwife to ask her parent’s permission to marry her. Without dialogue and without needing to cut to another shot, Haneke tells us everything in this single composition. 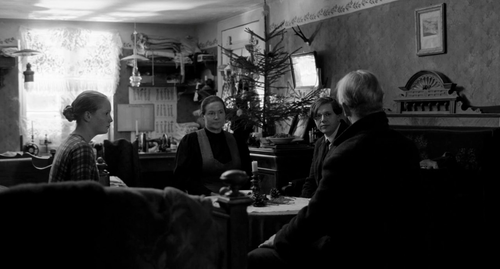 The schoolteacher is blocked by the father, his head lowered and eyes uncertain. The father is addressing the schoolteacher but his body is open, controlling the room. The mother watches him, knowing its not her place to speak. And then we have the midwife, haloed in light and what might as well be a mile from the others, not even invited to take part in the conversation. 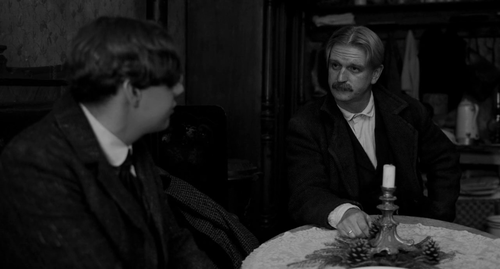 Once the women leave the room Haneke introduces a second shot and we see the same dynamics at play. The father’s body language is strong and the schoolteacher is not even in focus anymore.

After this scene we are told of another brutal incident and witness the pastor publicly humiliate his daughter. That the pastor’s daughter plays a large role in the closing of the film continues the film’s patriarchal criticism.

As a man driven by education, the schoolteacher tries to work through the who and why. From countless novels and films, we are conditioned to learn the facts and make our conclusions. In “The White Ribbon”, we learn very little about those answers. At the end of the film, the schoolteacher confronts the pastor with his conclusions. 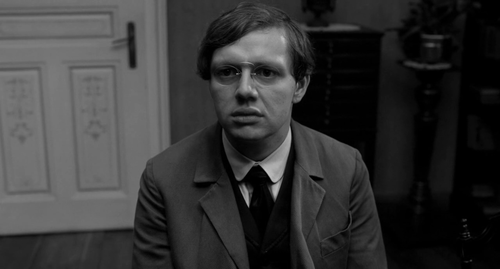 This is the first shot in the entire film that is framed from above head height. In shallow focus, logic and reason is flattened and swallowed by the room.

Although taking place at an important time in history, we are rarely given a sense that the town is aware of events beyond their borders. After the confrontation, we are then presented with a series of static shots of the town and are told that Archduke Ferdinand has been assassinated. 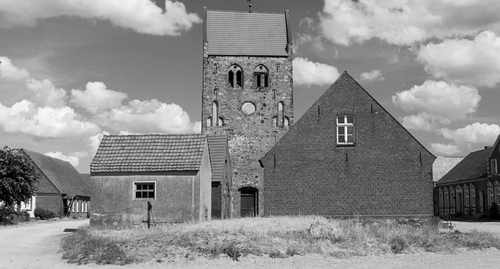 The church fills the screen bathed in light, phallic and alone above the town. 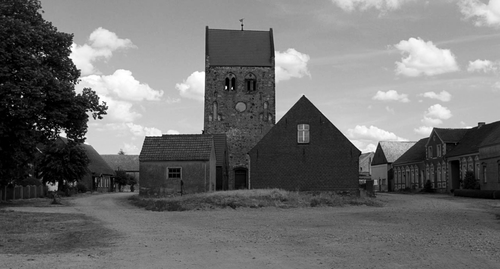 We are shown the emptiness of the church’s surrounds. 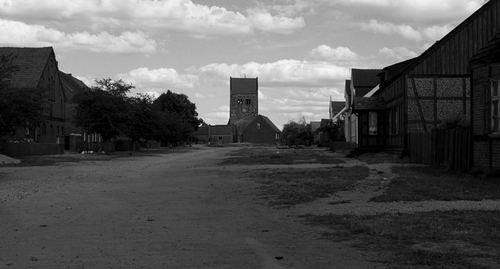 The town and church is now lost to the world. The institutions we’re told are the pillars of society are now cloaked in darkness. Going back to the first shot, was the world being allowed in or was it being held back?

That one of the maimed children was mentally handicapped has drawn the suggestion that this film is about the birth of Nazism. Perhaps not Nazism specifically, but I think Haneke wants us to think is that if it wasn’t Nazism it would have been something else.