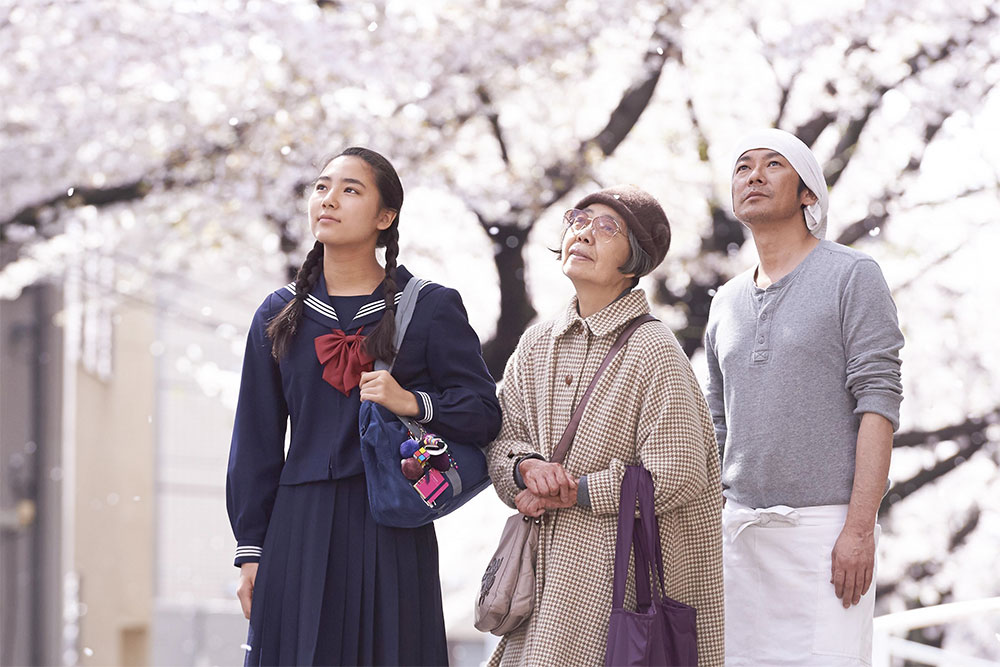 Throughout the history of Japan cherry blossoms have been a symbol of life, death and rebirth.

Japanese filmmaker Naomi Kawase’s latest film, “An”, from a script written by Kawase based on the book by Durian Sukegawa, explores these themes in modern Japan. Kawase wants us to think about how life—its pulse and energy—exists within societal and architectural structures governed by straight lines. Kawase has always been interested in how people and chaos can play out despite the conformity of their surrounds. That’s not to say the characters Kawase presents are wild characters—they are quiet and unassuming. They speak when they have to—which is usually out of need—and reveal their chaotic inner-lives through small facial movements.

Sentaro (Masatoshi Nagase) runs a small bakery serving dorayaki, a small pancake-like pastry usually filled with the titular an, a sweet red bean paste. When we first see Sentaro he is walking onto the roof of his apartment to smoke a cigarette. The ambient world comes alive as trains, cars, motors, electricity, people slowly fades into the soundscape. Sentaro is just as quiet at work—listening without being present. He gives little attention to his customers except Wakana (Kyara Uchida), a young school girl. Wakana is being pressured by her mother to get a job rather than continue her education.

When a seventy-four year old woman—Tokue (Kirin Kiki)—asks for a job, Sentaro accepts after tasting her homemade an—and confesses it’s the first time he’s ever been able to eat a whole dorayaki.

As performers, Nagase, Uchida and Kiki have a wonderful sense of how their characters form relationships to their environment and to other people. These are characters who find each other based on need and nothing else. They can communicate with little dialogue because their natural empathy can immediately understand the other.

Photographed by Shigeki Akiyama, the handheld camerawork used on the actors stands in contrast to the locked down, still-photography of the world around them. These movement that reveal their inner-moments challenges the structures around them—the lines that intersects the chaos. Each character needs something from the other to fill a hole in their life.

In their first encounter Tokue asks Sentaro who planted the cherry blossoms by his shop. As performed by Kiki, Tokue delivers this on a whim—a thought that had formed deep in her subconscious and then she made the sudden conscious act of revealing it to him. The film has time on its mind—age, time, death. It wants us to think about what happens when we no longer contribute to society. It’s not making a simple argument against ageism—Kawase sees Sentaro as someone not contributing to society either by closing off his emotions to the world around him. The colour palette of his clothes are muted—usually khaki or grey—and stands against the purple of Tokue and the deep blue or red of Wakana.

As Sentaro and Tokue work together they begin to communicate and reveal more about each other. Sentaro is obsessed with the time it takes Tokue to work and speaks in minutes and hours. Tokue likes to talk in terms of sunrises and sunsets—she survives from the natural world. Why is he obsessed with time? He is someone who’s been to prison—where you have nothing but time to obsess over.

What the characters need is to communicate with people they no longer can—which means they’re being crushed by ignorance or indifference. Their loved ones were asking them to let them go and they never could allow that until it was too late to be at peace with it.

Eventually Sentaro finds out Tokue has leprosy—long-treated and no longer contagious—and business drops as word gets around. He asks Tokue to leave. Later Sentaro and Wakana visit Tokue at her house—an apartment in a treatment facility with other lepers—and Tokue speaks about her husband, now dead, and how her brother took her through the post-war destruction only to abandon her at the leper facility when she was eleven.

The film works on a wavelength that is imbued with melancholy and the romance and poetry of understanding. Sometimes the poetry appears to arrive too easily. At the beginning of the film, Tokue speaks to Wakana about the full moon rising above the cherry blossoms. When Wakana and Sentaro visit her home only to find she is no longer there they turn to see a full moon glowing above the trees in her garden. I overheard critics after the screening mention the tidiness of the film’s poetry—everything fit together too easily.

This scene in particular reminded me of going with my family to see my grandfather at the hospital. He died before we arrived. On our way out of the hospital a young couple were walking into the maternity ward—the soon-to-be mother ready to give birth.

“An” is a film that wants us to think about that randomness—for it is randomness, if we had left via another entrance we never would have seen the couple—and that in the face of a universe that is overwhelmingly indifferent to our existence, we still find causes for hope and we continue.

This is a wonderful film. I’ve been on its wavelength since I left the theatre.