When I can’t think of anything to watch I put on Sidney Lumet’s “12 Angry Men”.

I’ve seen it more times than I can count and it still keeps me interested. I’ve seen it enough to start disliking some elements of Miller’s writing:

Lumet famously shot “12 Angry Men” from three angles—above eye-line, level and below, making the room smaller as the action progresses. You can see the progression over the screencaps below, but that’s not that I wanted to write about.

I want to write about a few other visual techniques Lumet uses to frame Juror Eight, and why I find this film so compulsive. It’s the 12 or so shots that happen in the first 20 minutes from when the first vote is counted.

Below we see the result of the first vote. Eleven jurors vote guilty. Lumet shoots in a way to make Juror Eight, the only dissident, small and unnoticeable. All we see are hands. 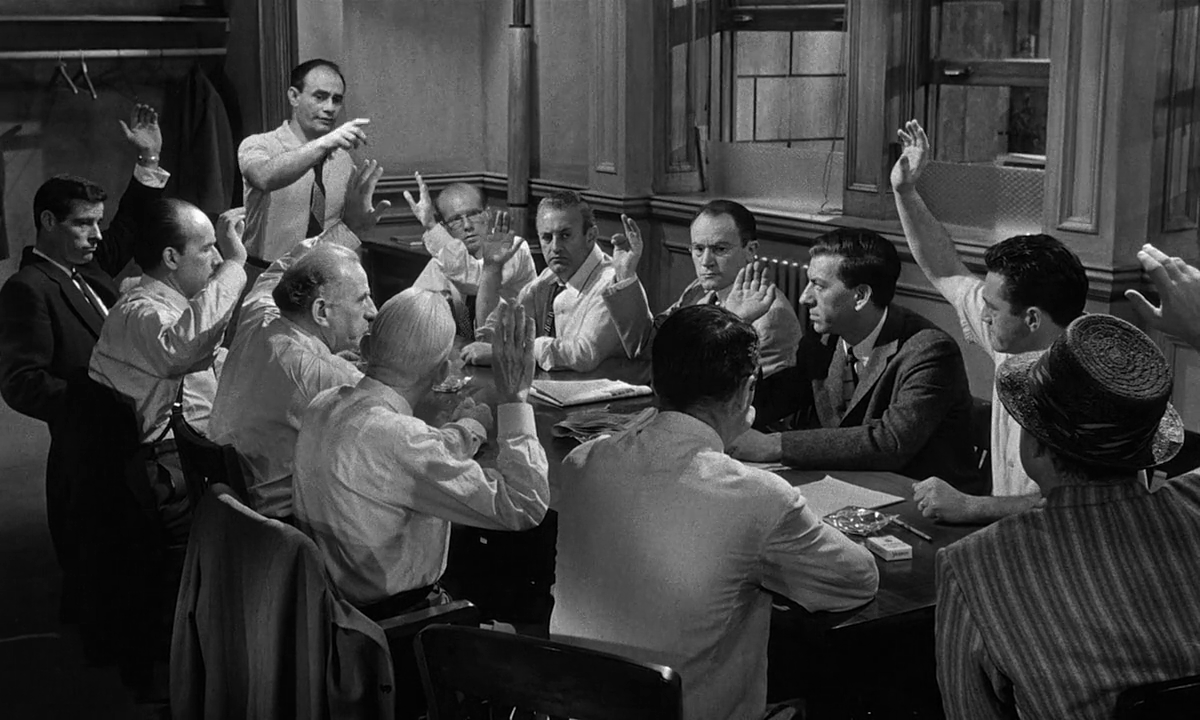 When the Foreman asks for those voting not guilty, Lumet goes for a reverse shot, only now the (lone) hand is down the back of the room. He couldn’t make Juror Eight feel smaller if he tried. 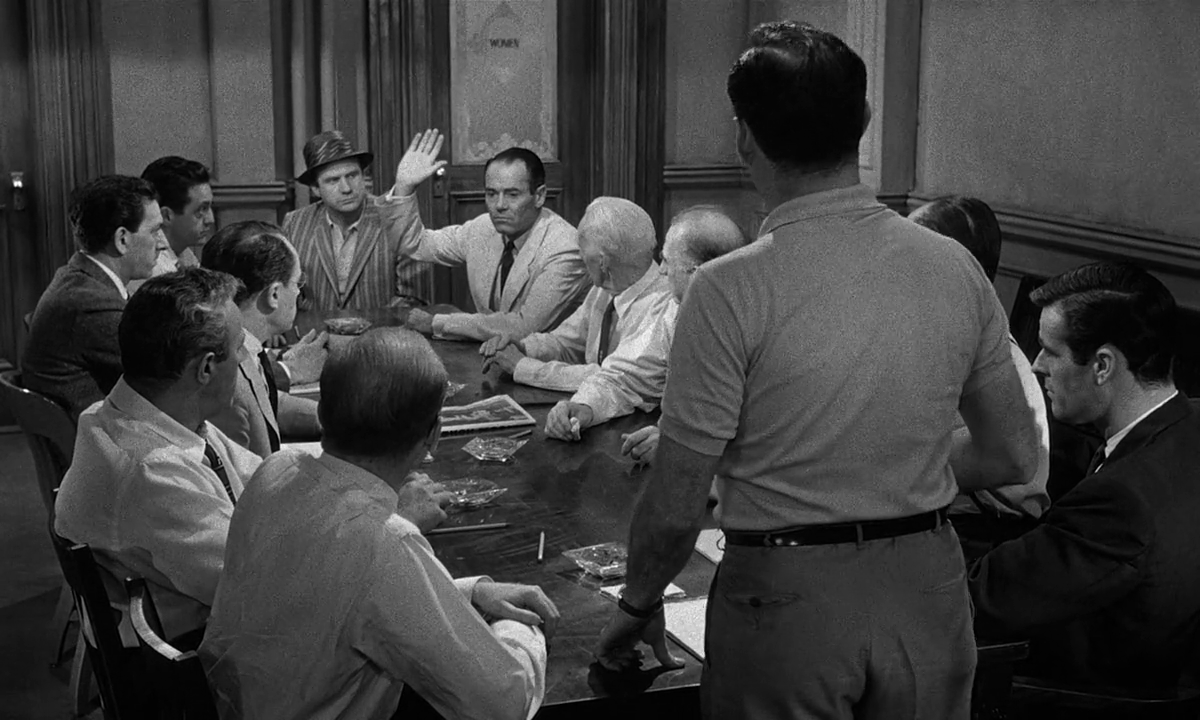 When Juror Eight is pressed for reasons, there’s a variation on the initial shot, only now the table acts as vast space between Eight and the rest of the jurors. Their eyes locked on while he can’t make eye contact. Eye contact will continue to play an important role throughout. 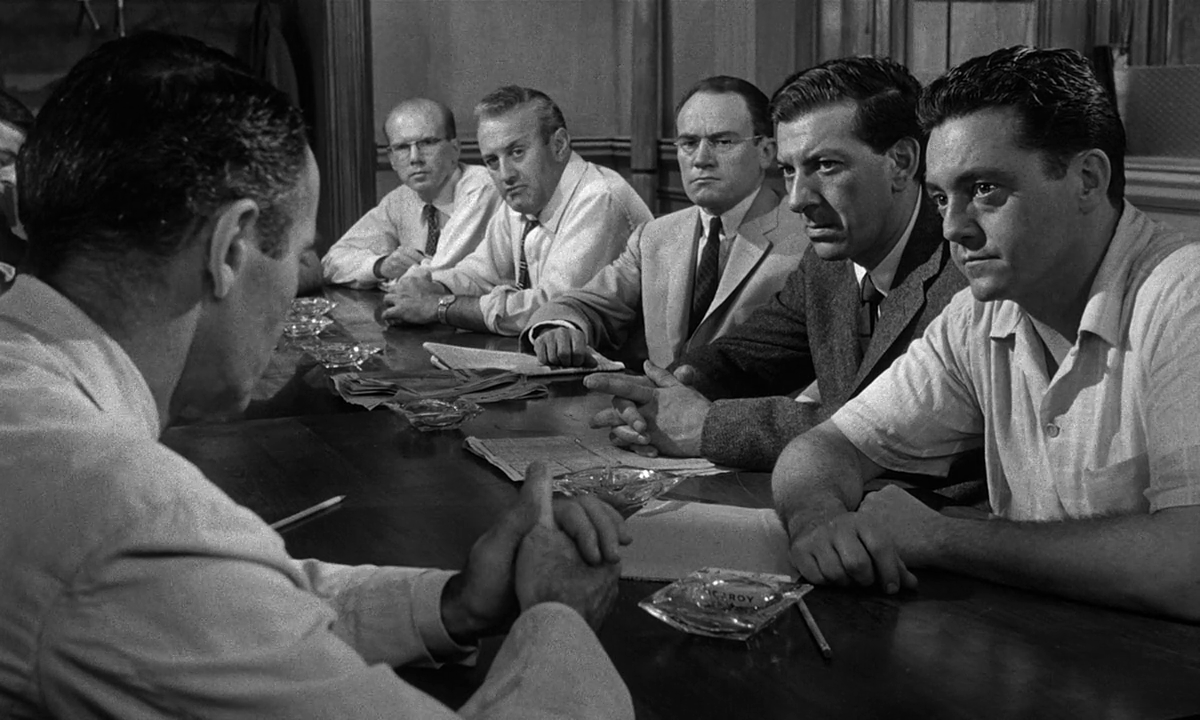 When it’s time for the others to speak, we are shown the first close up of the film, and it’s Juror Eight, alone. 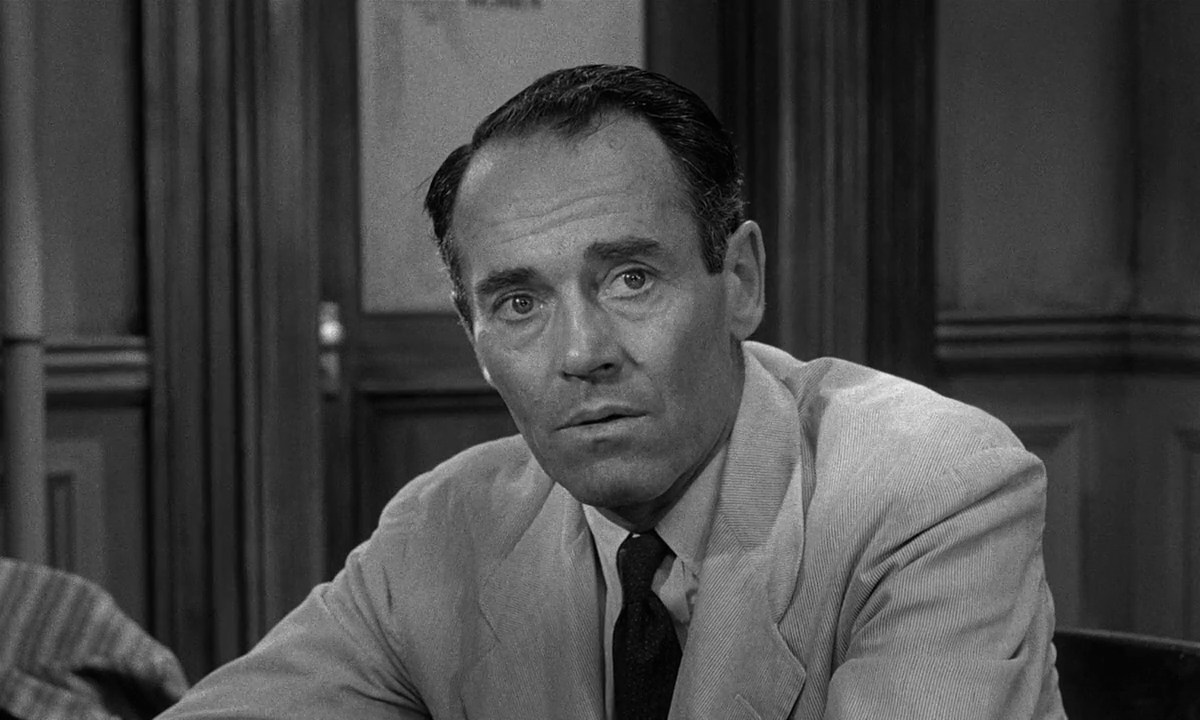 The next shot is another close up, this time of Juror Three, only notice how much more he commands the frame. There’s no space around his body; his body fills it. He’s also more prominently shadowed by another body.

It’s important that the first close ups are on Eight and Three as these two will go on to clash heavily. 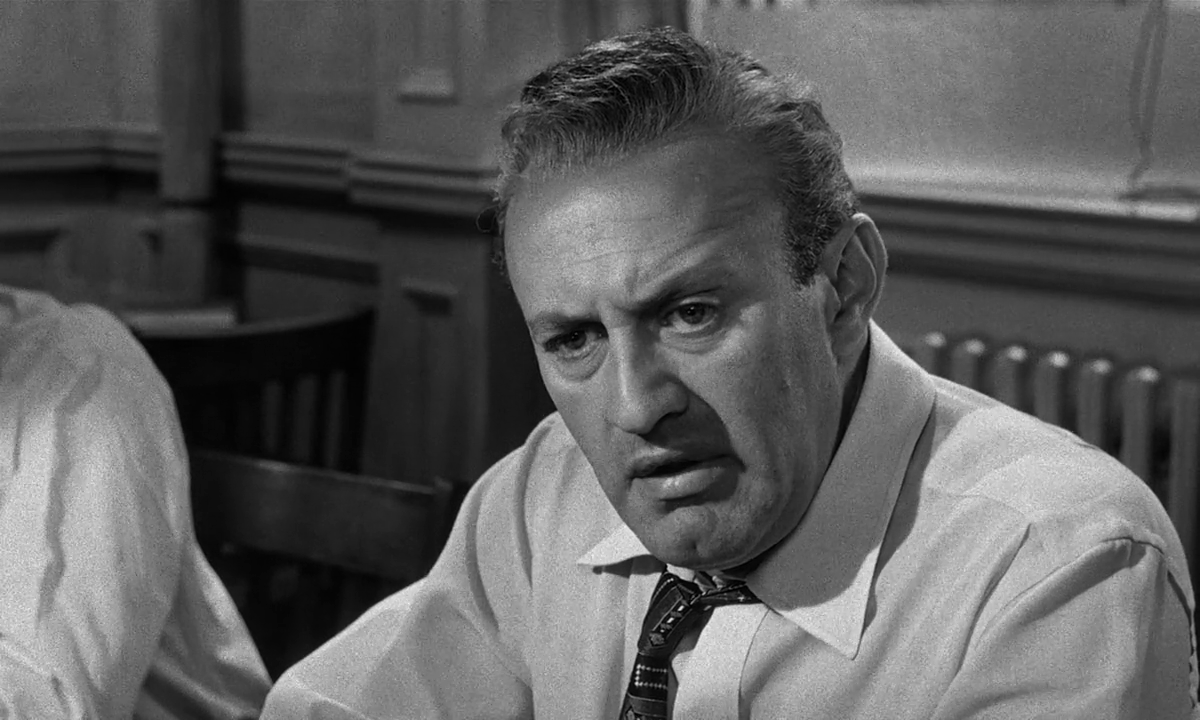 Lumet then cuts to a two person mid-close as Eight and Seven talk. While Seven is talking, his body is open, his weight shifted forwarded. 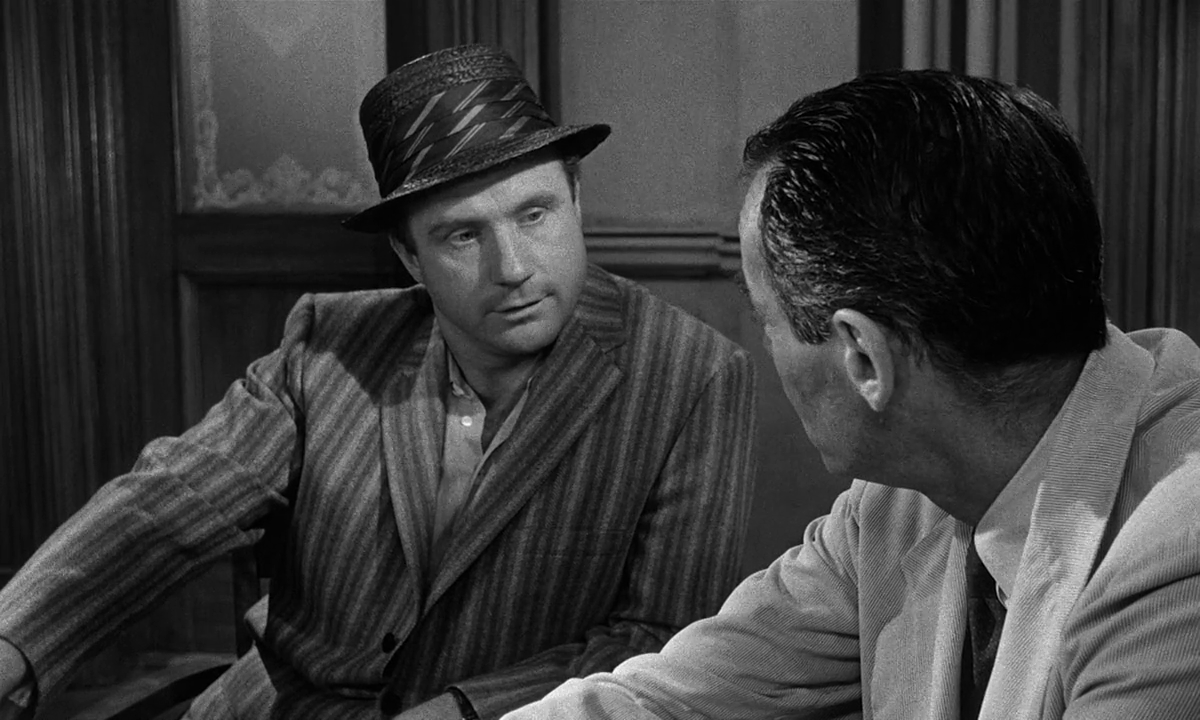 When Eight begins to respond, his body shifts away. There’s also clear separation between the bodies that wasn’t there in the previous shot. 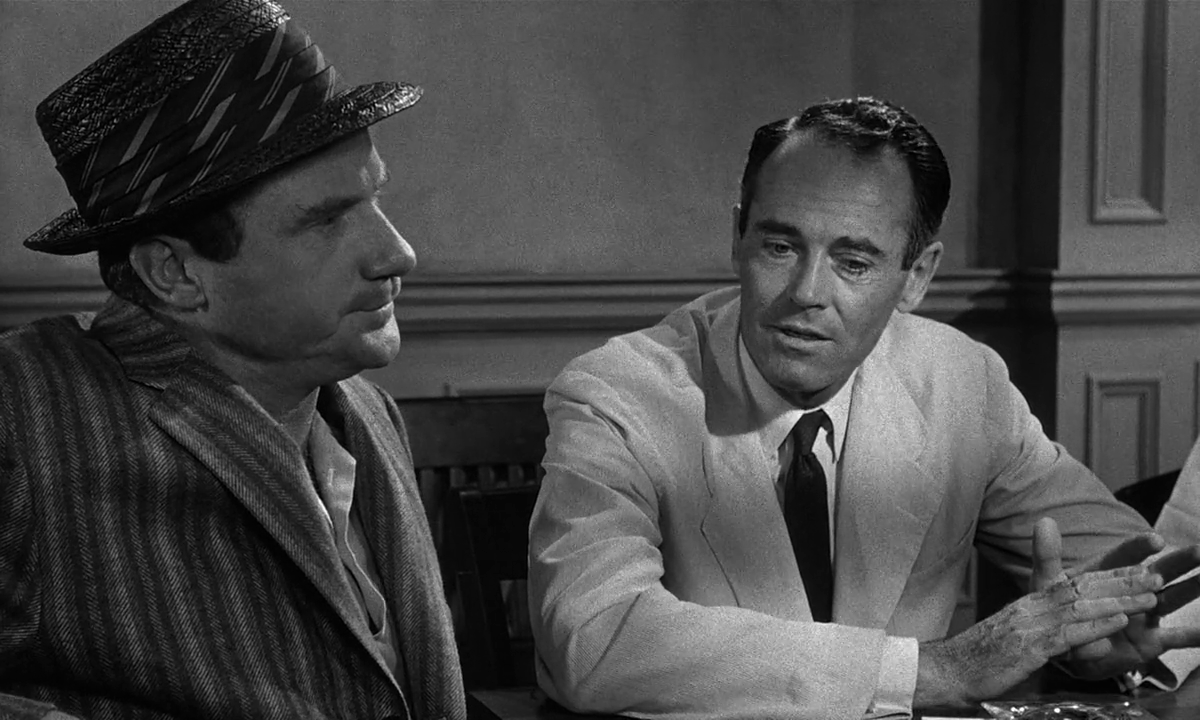 Even when cutting to a seemingly innocuous shot of two other jurors, Lumet makes a point of having their bodies block each other (the arms and the shadows). 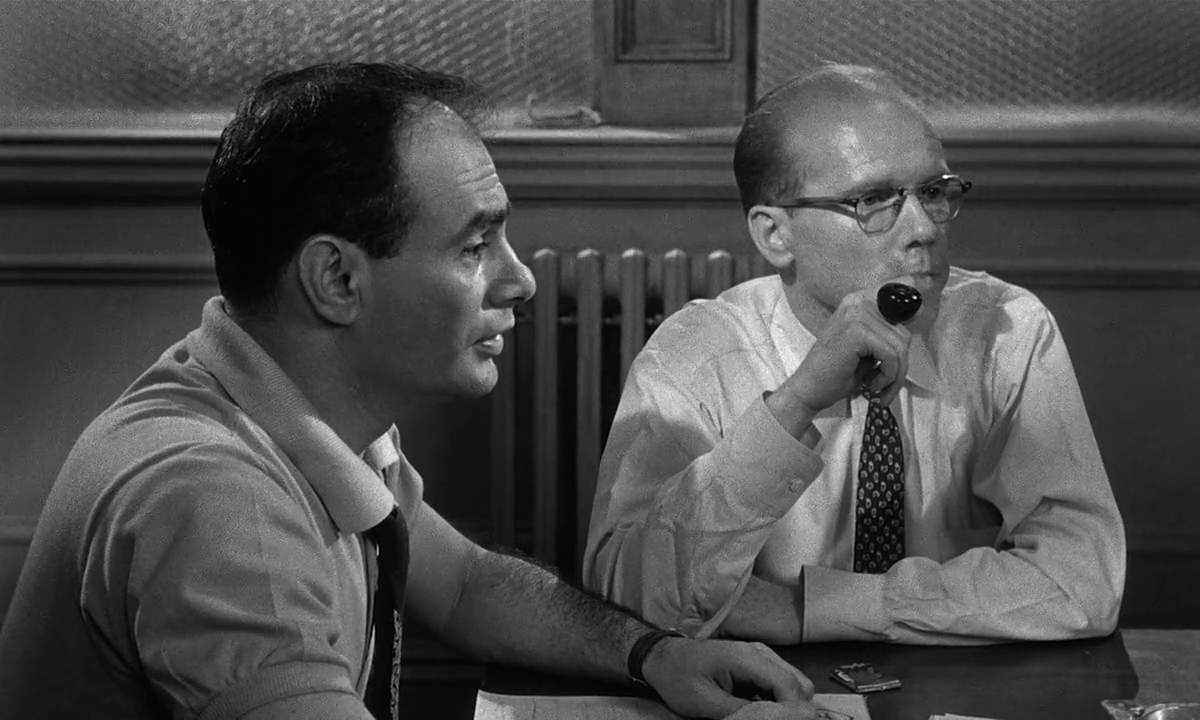 As Juror Eight presses further for his case, we’re now shown a three person mid shot, a visual representation of the way Eight is affecting the room.

Again, notice the separation between Eight and the other jurors. 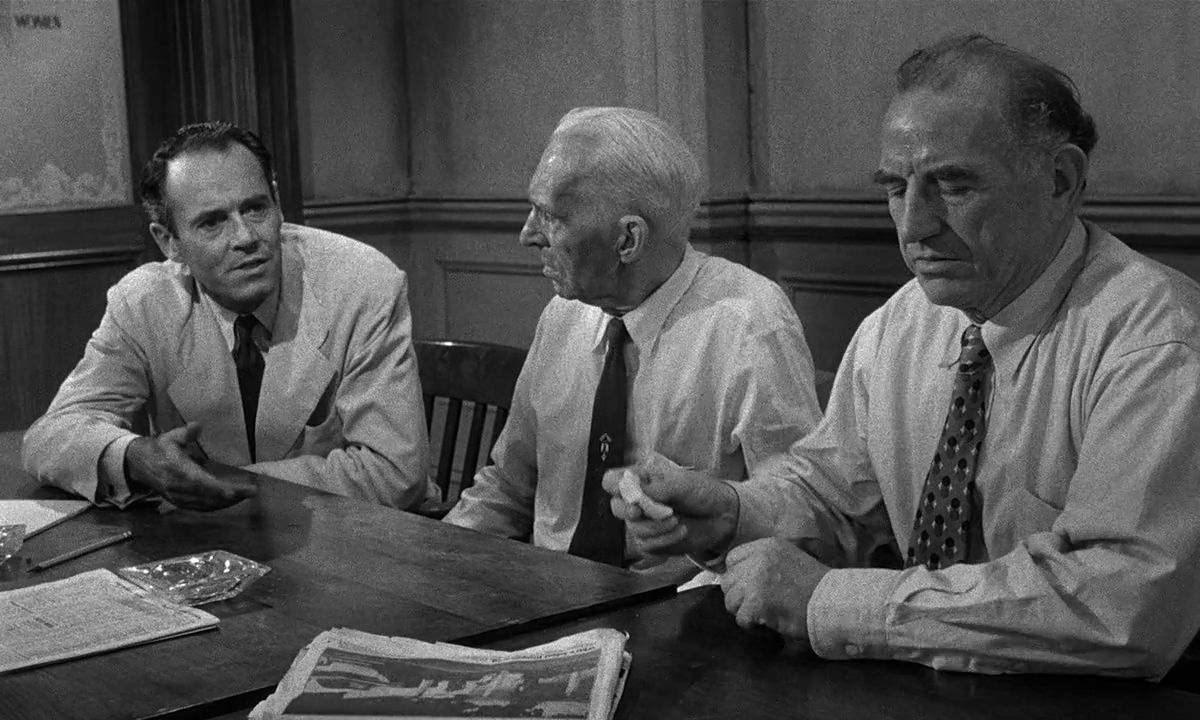 Again, there is a reverse shot of similar make up, and again, the bodies are blocking each other. Even the Foreman, who would have separation on his left-hand side, is blocked by the edge of the frame. 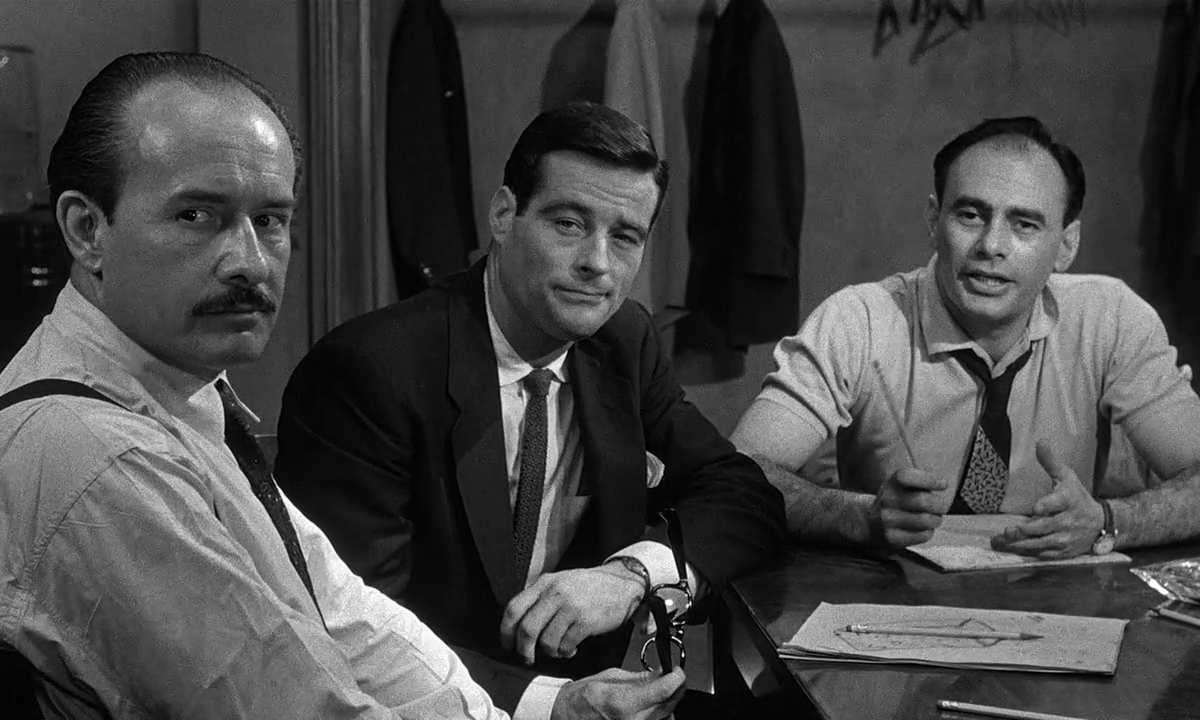 Juror Eight is alone in the frame, only this time he fills more of the space, he is more present and he is making eye contact. Even Juror Seven’s body is more present in this shot than the earlier shot. 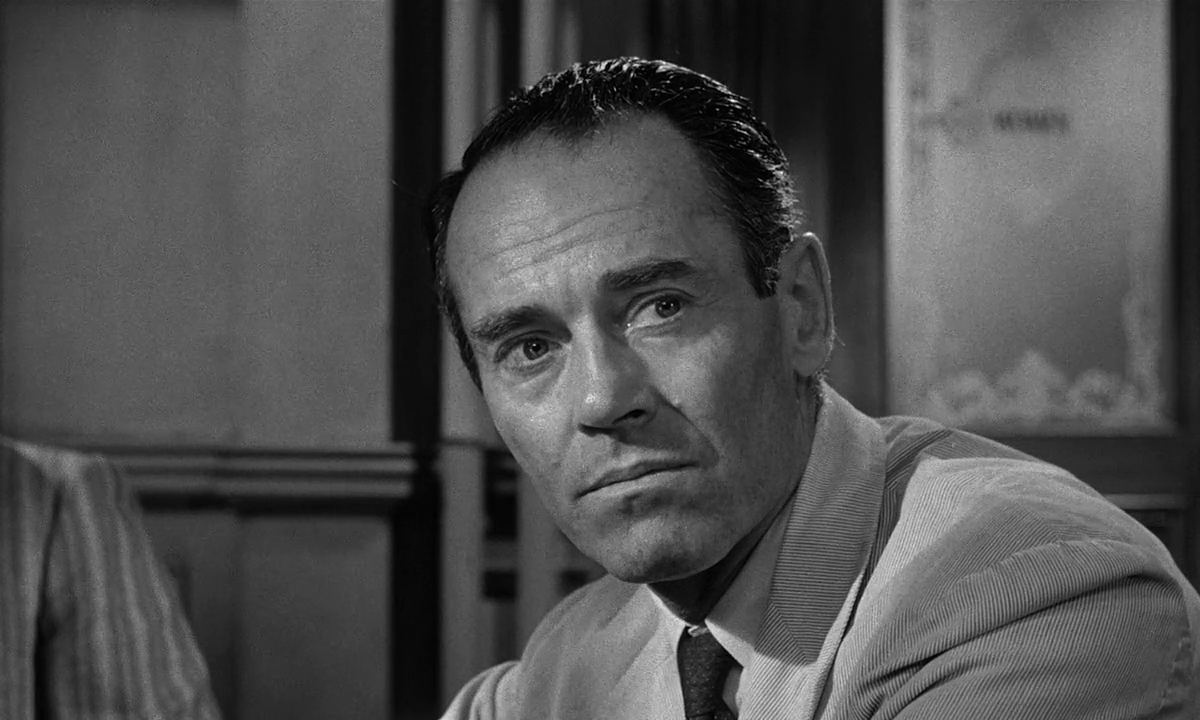 When Juror Eight continues, we now see six jurors in shot. Eight is making eye contact as he speaks.

He can’t stop this thing he started. 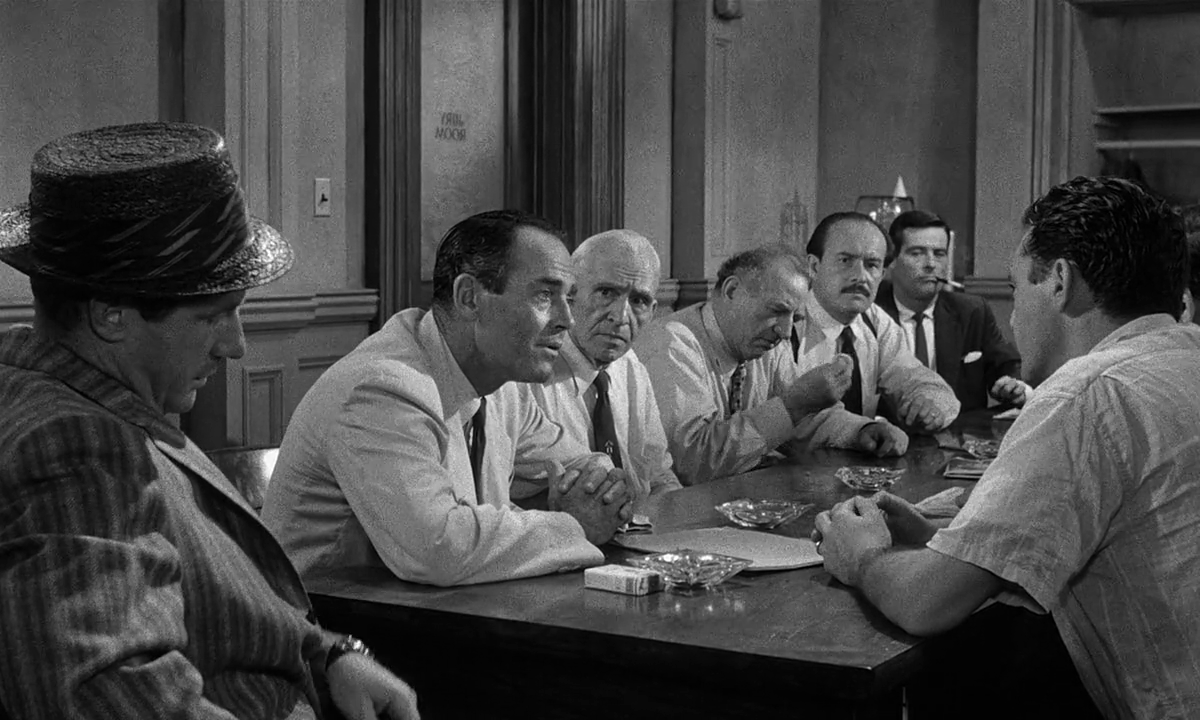 This shot is unrelated to the above but I found it interesting all the same. Juror Eight and Juror Seven are arguing back and forth over the boy, the boy’s father, what punishment is suitable for the boy… the dialogue is loaded with references to masculinity.

And what sits between the jurors, filling the space between them? A small sign that says “women”. A sign representative of a voice not participating in this discussion, but sorely needed all the same.

The shallow analysis above takes place over a twenty minute period but it’s a good indication of why I keep coming back to this movie.

Yet each viewing keeps opening up more depth.

This is an excellent film.